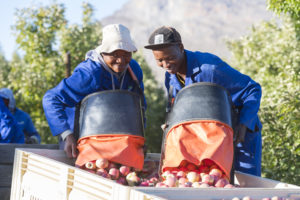 The Karsten Group acquired Hoogland in 2000 and has since then redeveloped the apple and pear portfolio, as well as introduced a range of the best available plum and cherry varieties. Hoogland, with its very cold winters and fairly mild summers, offer the opportunity for not only growing apples and pears, but also cherries, which are also dependent on the specific cold winters. Being a late farm in terms of climate and fruit maturity, Hoogland focuses on fruit varieties and cultivars which ripen late in the season and are most suitable to this micro climate. In the case of apples, bi-colour varieties do particularly well at Hoogland.

The production capacity at Hoogland was extended in 2003 when a neighbouring farm, Welvaart, was acquired and became part of a consolidated and bigger Hoogland Estate. To date the Hoogland/ Welvaart Estate is planted with 157 ha of apples and pears, 14 ha of plums and 14 ha cherries which are grown in Haygrove tunnels. This estate is an excellent high producing unit and can compare with the best farming units in the Western Cape.

This website uses cookies to improve your experience while you navigate through the website. Out of these, the cookies that are categorized as necessary are stored on your browser as they are essential for the working of basic functionalities of the website. We also use third-party cookies that help us analyze and understand how you use this website. These cookies will be stored in your browser only with your consent. You also have the option to opt-out of these cookies. But opting out of some of these cookies may affect your browsing experience.
Necessary Always Enabled

Performance cookies are used to understand and analyze the key performance indexes of the website which helps in delivering a better user experience for the visitors.

Analytical cookies are used to understand how visitors interact with the website. These cookies help provide information on metrics the number of visitors, bounce rate, traffic source, etc.

Advertisement cookies are used to provide visitors with relevant ads and marketing campaigns. These cookies track visitors across websites and collect information to provide customized ads.

Other uncategorized cookies are those that are being analyzed and have not been classified into a category as yet.